Impact of "Carbon Neutrality" on Edible Oil Industry
Home > News > Impact of "Carbon Neutrality" on Edible Oil Industry
Impact of "Carbon Neutrality" on Edible Oil Industry
What is carbon neutrality?
Carbon neutrality means having a balance between emitting carbon and absorbing carbon from the atmosphere in carbon sinks. Removing carbon oxide from the atmosphere and then storing it is known as carbon sequestration. In order to achieve net zero emissions, all worldwide greenhouse gas (GHG) emissions will have to be counterbalanced by carbon sequestration.
The main culprit behind floods, droughts, extreme cold and heat waves, and melting glaciers are greenhouse gases emitted by human activities, which have caused global warming to intensify and pose a huge threat to the earth. So it is imperative to take action.

UN member states have reached a consensus to achieve global "carbon neutrality" between 2050 and 2100. A growing number of countries have announced timelines for achieving carbon neutrality. China also clearly stated in 2020 that it would achieve carbon neutrality by 2060.

Edible oil industry and "carbon neutrality"
In order to achieve the goal of carbon neutrality and zero emissions, countries have begun to carry out energy transformation: gradually reduce the use of fossil energy such as coal and oil, and shift to wind power, solar energy, biomass and other low-carbon clean energy. Soybean oil, palm oil, canola oil and other vegetable oils can be used to produce biofuels, so vegetable oil is no longer just for human consumption, cars, airplanes, ships, etc. also "drink" vegetable oil.

Indonesia, the largest producer and exporter of palm oil, mandates a 30% blend of palm oil (B30) in diesel in 2020 and plans to increase to B40. Malaysia plans to complete a national B20 biodiesel program by 2022.
The United States has clearly proposed a clean energy plan and focus on the application of biomass liquid fuels. More and more soybean oil in the United States is used to make biodiesel, which has accounted for about 40% of the total consumption of soybean oil.

Although the mandatory biodiesel blending policies of various countries have been repeated from time to time, the industrial demand for vegetable oil is rising in the context of global "carbon neutral", accounting for about 30% of the total global demand for vegetable oil, and it is difficult to reverse the direction of advancement.
Industry giants are looking to the wind and have set off a wave of entry into the biofuel market.

Since 2021, international grain merchants such as ADM, Bunge and Cargill, international energy giants such as ExxonMobil, Marathon Oil and Chevron, and even international food giants including Nestle, have increased their bets on the biofuel sector. They build and expand new soybean, rapeseed and other oilseeds crushing plants, or renovate traditional oil refineries, or join hands with joint ventures to produce renewable diesel.
As the scale of biofuel processing capacity continues to expand, giant producers are bound to compete fiercely around feedstock including vegetable oils, thus becoming an important variable affecting the supply and demand pattern of oils and fats. The raw material side of the edible oil market may experience more thrilling ups and downs.

Edible oil producers and "carbon neutrality"
For edible oil producers, "carbon neutrality" means that the traditional industrial era is coming to an end, but also means the advent of a green development approach and a possible trend of low-carbon food consumption.
In the future, regardless of the size of enterprises, they will have to set carbon emission reduction targets and design carbon emission reduction initiatives, even affecting bank loans, because banks also have the task of "green finance" to reduce emissions.

In July 2021, the UN Global Compact released the report "Corporate Net Zero Pathway", which recommends that companies in all industries develop net-zero transition programs based on nine key initiatives. 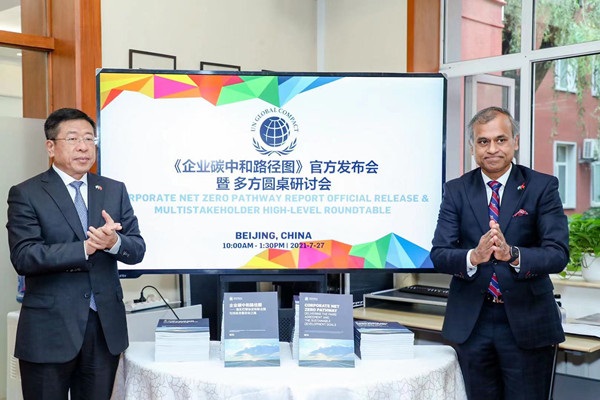 China's leading edible oil manufacturers have already begun the practice of "carbon neutrality".
In 2020, 88% of the energy needs of COFCO International's global operations has been met by renewable energy and carbon emissions has been reduced by 4% overall.
Yihai Kerry has adopted green development measures, such as building a solar photovoltaic system on the roof of an existing factory building, to reduce carbon emissions and reap economic benefits.
Low-carbon food development will also be a new opportunity. Low-carbon food is food that consumes less energy and emits less greenhouse gases during its life cycle (from the processing of raw materials to the consumption), while the opposite is high-carbon food.

In a word, "carbon neutrality" has risen to the level of global strategy, and the driving force of green technology and low-carbon food industry innovation is bound to strengthen. In order to avoid lagging behind in the transition to a green economy, edible oil manufacturers should plan early for "carbon reduction" goals such as circular economy, green energy, and zero-carbon factories, and start putting them into practice.